A sneak peak at what I’m working on for my tutorial session at OSCON. Be there at 8:30 Monday morning for the important details. You’re sure to find my new venture exciting—perhaps the most important social media announcement of 2010. You can’t afford to miss that, can you?

I just saw that the OSCON 2006 Call for Participation has gone up. Deadline is February 13, 2006. I’ve been thinking about some of the things I’d like to see:

I’m sure I’ll think of others in the coming weeks. What ideas do you have? Post them below!

Kineticode has posted PDF versions of my my OSCON 2005 presentation slides. Direct links: 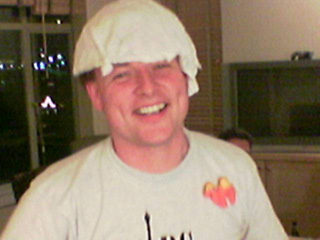 I just had to share this lovely picture of Nick Clark, taken on the Friday night of OSCon 2004 at Matt Sergeant’s party. I honestly have no idea what Nick was doing, but it was worth it for the photo, don’t you think?

I’m finally getting round to typing up my thoughts on my OSCon 2004 experience. I would’ve done it sooner, but I spent most of last week on the road and fixing bugs in Bricolage.

OSCon 2004 was, in a word, great! I spent every day of the week there, getting there around 8:30 each morning, and finally leaving the hotel or a party each night somewhere between midnight and 3 am. I was even there late on Sunday night, talking to folks who just came in, and late on Friday night, at a party in Matt Sergeant’s room. It was great to see so many friends there, including Casey, Schwern Jesse, Nat, Bruce, Josh, David, Elein, Dan, Nicholas, James, Arthur, Robert, Ask and Vani, my brother, Alex, and probably lots of other people I’m forgetting about.

There were more conversations between members of different communities than I can recall seeing at past OSCons, and people were generally excited and engaged. I’m told that they had the highest number of attendees since 2001. The energy at the conference was very positive, and people seemed very interested in things that other people were doing. Some of the highlights for me:

Speakers Sterling Hughes and Thies C. Arntzen talked about how amped they are at the idea of poring PHP to run on Parrot, the virtual machine being developed for Perl 6 and other dynamic languages. The session ended up as a conversation between Sterling and Thies, on the one hand, and Larry Wall and Dan Sugalski, who were sitting in the front row, on the other. Larry assured them that any programming language community’s members would be “first-class citizens” in the Parrot world, and Dan told them that all they need do is ask for things they need and the Parrot developers would help as much as they could. Sterling wrapped up by saying something like, “I guess the real reason we’re so excited about Parrot is because we really love Perl!” That got a good laugh.

There was a bigger PostgreSQL presence than ever at OSCon this year, with lots of great discussion. There seemed to be quite a few Perl folks going to the PostgreSQL sessions, too. Dan Sugalski was suitably impressed with what’s coming up in PostgreSQL 8.0 (formerly 7.5) that he told me that he was moving up his plans for implementing pl/Parrot. A few of the core PostgreSQL folks said that they felt like people were finally being more open and exited about their use of PostgreSQL, rather than keeping quiet about this “strategic advantage.” And the features in 8.0 sound extremely promising, including Win32 support, save points/nested transactions, point-in-time recovery, tablespaces, and pl/Perl. It’s going to be a kick-ass release, no doubt about it. Watch for the beta this week.

SQLite is fast, ACID-compliant, relational database engine in a public-domain C library. It’s great for embedding into an application because it’s not a client-server application, but a simple library that stores databases in files. It’s twice as fast as MySQL or PostgreSQL because it doesn’t have the client/server overhead, and its extremely portable. Version 3.0 adds UTF-8 and UTF-16, which makes it a real possibility for use in Bricolage 2.0 (for small installations and demo servers, for example).

I was pretty amazed at what this little database can do, and not only is it open-source, but because it is in the public domain, there are no constraints on its use. It’s just one sexy library. Everybody run out and use it now! Perl users get it for free by installing DBD::SQLite from CPAN.

A year later, Dan lost the bet with Guido, and gave him a case of beer, ten bucks, and the right to put pie in his face. Dan even made two key-lime pies for the occasion! At the Python lightening talks, Guido graciously declined to pie Dan. The Pythoners seemed to think that this was very nice of Guido, but the Perlers in the audience (including yours truly), were shouting, “Get him! Give him the pie! Do it, Guido!”. As Allison commented later, it’s nice how “the Perl community takes care of its own.”

Dan later auctioned off the right for someone else to pie him in the face. Schwern ponied (heh) up the cash, a ca. $500 donation to the Perl foundation for the right, but gave it to Ponie developer Nicholas to enjoy. The event came off just ahead of the final keynote. This time Guido decided to go ahead, and he doused Dan in cream pie. Then Nicholas came out and gave Dan the dessert, so to speak. Great fun for all.

The upshot, according to Dan, is that Guido wrote a really evil test suite with seven tests exercising 75% of Python’s ops. Of the seven tests, Dan got 4 working on Parrot, and 3 of those were 2-3 times faster than on Python. Things look very good indeed for Parrot going forward. Look for the tests to be fully working on Parrot (and fast!) in the next few months.

There were parties and conversations every night, lots of great talk, good food, good friends, and, well, I just had a great time. I can’t wait until next year’s OSCon!

My presentation went off well yesterday. It was in a small room, and I was delighted to find that it was standing room only. Several people told me later that they weren’t able to even get into the room. I told Nat that next year he’d have to give me a keynote.

This is a new version of my usual presentation. It simplifies some things, and uses the new Bricolage Website for its example. I think that it was positively received. I’ve worked hard to try to make the presentation engaging, and it was nice that I didn’t lose my audience; no one left during the presentation that I noticed (although it was mighty crowded in the back!). So I’m happy with it.

The launch of the new Bricolage Website went off without a hitch yesterday. The lack of sleep getting it all just so was worth it, in the end. And I’m very very pleased with the new site. It looks good, it’s easy to navigate, it has really nice semantic XHTML 1.1 that degrades nicely in older browsers (check it out in Netscape Navigator 4.x or in lynx!

The new content on the site is good, too. There’s a lot more information for people who have heard of Bricolage and are hitting the site for the first time to try to learn something about it. We now explain what it is and what it’s for on the home page, and have a nice set of pages describing the benefits of Bricolage, listing the sites known to be powered by Bricolage, and providing screenshots to give folks a feel for how nice the Bricolage UI is. Special thanks to Marshall Roch for providing the new design and the home page content.

This is the first Bricolage Website to be managed in Bricolage itself. I decided to create the new site for a number of reasons, but two of the more important ones were: to have a nice example for conference and client presentations; and to be able to release the Bricolage Mason templates that generate the site. These templates have now been released and are available for download on the Bricolage Website. I’ve worked hard to try to make them really good examples of best practices in using Bricolage so that people can download them, study them, and be able to start writing smart templates for their on Bricolage implementations. So enjoy!